A surprising number of Eastern cemeteries are the final resting places for Revolutionary war veterans and other participants.  However, be sure to investigate graveyards in which you don’t expect to find Revolutionary soldiers.  An example is Arlington National Cemetery, which entombs the remains of eleven Revolutionary soldiers, all of which have been reinterred from other resting spots.  For a guided tour with life story descriptions of the eleven Patriots’ Arlington gravesites, see a Journal of the American Revolution article. While cemeteries house the remains of Revolutionary War participants and their families are concentrated in the Eastern US, don’t overlook cemeteries in other countries that participated in the war including Canada, Great Britain, France, Spain and the Netherlands.

Prominent in Revolutionary lore is an oft told story of Peter Muhlenberg, a Virginia parson who ripped open his clerical robes unveiling a Continental Army uniform and joined the fight for independence from British rule.  The Oak Hill Cemetery contains the remains of Stephen Balch, another “fighting” parson who served in the Maryland Calvert Country militia during the first two years of the Revolutionary War. In 1777, Balch turned down a promotion and left the militia to study the ministry and became a licensed Presbyterian pastor in 1779.  Soon afterwards, Balch moved to Georgetown, MD (current day Washington DC) to serve as a new church as its preacher.  With a life-long interest in books, Balch is believed to have published the first book in DC. 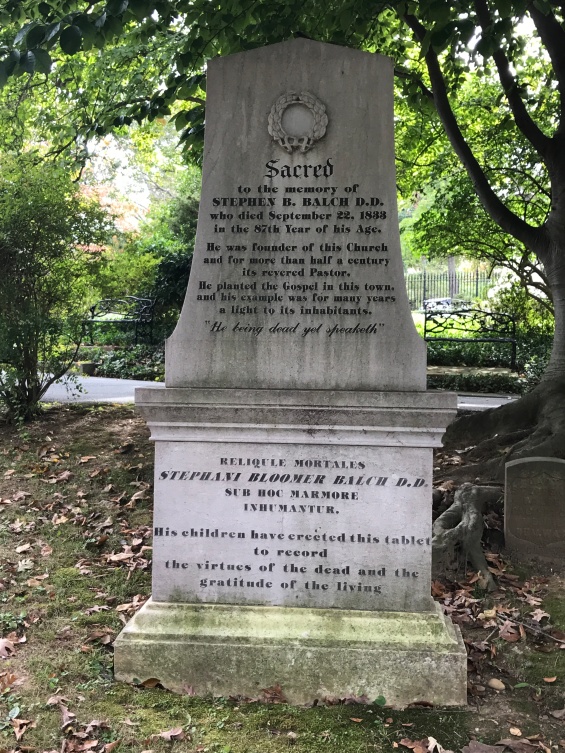 Bloomer’s grave site is noted by a Daughters of the  commemorative medal, similar to many other American Revolution veterans and is an easy way to visually locate Revolutionary War veterans.

Forrest served in several Maryland Continental Army regiments rising to the rank of Lieutenant Colonel. In the thick of 1777 Battle of Germantown, Bach suffered a serve wound and three days later surgeons removed one of Forrest’s legs.  Forrest survived the crude amputation and despite his maiming, continued to serve in the Continental Army for the next two years.

In 1779, he resigned his commission to embark upon a highly successful business career.  After a stint in London, he returned to the United States to settle in the area of southern Maryland, which became the District of Columbia.  Both his house in Georgetown (currently the Ukraine Embassy) and his country estate in Cleveland Park called Rosedale remain standing today and are additional reminders of his sacrifice and service.

After the war, Marylanders named Forrest a delegate to the Continental Congress and upon enactment of the US Constitution, he became a clerk in the DC courts.  Like many Revolutionary War officers, he owned five slaves after the war.

In 1776, John Adlum enlisted in the Philadelphia Flying Camp (light infantry) and immediately served in the chaotic and combat filled campaign around New York City.  In his pension application, Adlum noted a chance encounter with Maj. Gen. Nathanael Greene in which he challenged Greene to produce official papers permitting him to pass the checkpoint.  When Greene did so, Adlum became both embarrassed and highly concerned for his reputation and the potential for retribution.  Fortunately, Greene regarded Adlum’s conduct as appropriate and the matter was dropped.  Adlum likely included this vignette to bolster his chances of receiving a pension.

In November 1776, Adlum became a British prisoner while defending Fort Washington in New York City, one of the largest and most disastrous Patriot surrenders in the war.  Fortunately, Adlum endured only a few months of captivity before the British paroled him.  For more information on his military service, see Adlum’s well regarded and published diary and his later pension application. Upon receiving his parole, Adlum returned civilian life residing first in Pennsylvania, then moving to Maryland and finally to Washington DC where he died.

Lost today, but during his lifetime, Adlum became very well known as the “father of American viticulture” and published the first winemaking book in the United States.  Adlum cultivated a grape he named Catawba which ended up being the seed grapes for vineyards in upper New York State, throughout the Middle Atlantic region and New England.  However, creative as a grape grower, Adlum was not a talented vintner and his wines were not commercially successful.  In his last days, Adlum relied on his small Revolutionary War pension for financial support.

So next time you are walking past a seemingly haunted bone yard, overcome your fears and investigate the oldest graves!  You many find a little known story about an interesting Revolutionary Era figure and maybe ideas for your next research project.